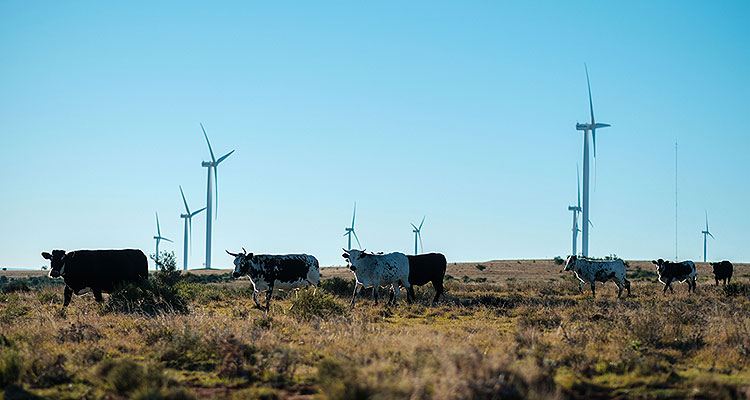 In 2011, it was the largest wind farm to be bid into the first round of South Africa’s Renewable Energy Independent Power Producer Procurement Programme (REIPPP) — a government initiative to increase the country’s renewable energy production, and channel private investment and expertise into the sector.

In 2014, Cookhouse became the first wind farm to be connected to the transmission system, supplying renewable energy under a 20-year Power Purchase Agreement with South Africa’s power public utility, Eskom.

“The AIIM directors have brought vast industry knowledge, operational expertise and investment experience to the table. The ability to access this multi-sector experience allows us to execute on specific strategic projects whilst maintaining a lean staffing structure focused on the day-to-day operations. They act as our strategic sounding board, supporting us to steer the business to growth.

AIIM has interests in, and exposure to a wide array of infrastructure projects across Africa. It is this vision that allows them to contribute experience and high-level thinking of value to a business like Cookhouse. AIIM are hands-on and active, but they are not micro-managers.”

African Infrastructure Investment Managers (AIIM), part of Old Mutual Alternative Investments and Africa’s largest and most experienced infrastructure equity fund manager, identified the strong investment opportunity presented by the REIPPP programme. The South African government launched the REIPPP programme in 2012 with the first bidding round of a planned 7 000MW programme. Now in its fourth bidding round, REIPPP has procured 6 422MW from 112 Independent Power Producers, bringing investment of ZAR 201 billion. The recent signing of 27 new projects brings R56bn investment alone, with AIIM’s managed funds representing one of the largest investors in the programme with more than ZAR7 billion committed across 26 projects.

The Cookhouse project was developed by African Clean Energy Developments, an AIIM group company, and offered a compelling investment within the REIPPP programme - the site had direct access to a vital transmission line reducing its construction costs, the development team had previous international experience and as a result of an extended period of wind measurements its energy yield could be estimated with a high level of confidence. The investment, which was financed through AIIM’s African Infrastructure Investment Fund 2 (AIIF2), Apollo and IDEAS funds, provided the funds with strong risk adjusted returns through a contractually robust investment structure with experienced international partners.

One of the first measures implemented by AIIM, following investment, was to leverage its extensive industry networks to source a world-class management team to lead Cookhouse. In addition to formalising best practice governance procedures and internal controls, the team also drove the establishment of the Cookhouse Community Trust – a platform to ensure long-term alignment of interests between the project and its host communities.

Indeed, AIIM’s innovative deal structuring enabled 25% ownership of Cookhouse to be held by the local community through the Cookhouse Community Trust. This is five times the governmental target for local community ownership. Cookhouse’s community liaison platform and activities have been publicly recognised by the South African government, which has referred to them as a benchmark for similar programs, demonstrating progressive approaches and initiatives.

A key focus for Cookhouse is the sustainable socio-economic development of its host communities. It aims to achieve this through capacity building, skills transfer and funding of Socio-Economic Development (SED) programmes that address local needs. Cookhouse’s initial analysis and consultation with surrounding communities revealed that education and, in particular, early childhood development was a pressing priority in the area.

Since inception, Cookhouse has supported a range of NGOs in the education sector and, in 2016, launched its own Early Childhood Development (ECD) Flagship programme for children aged 0-6 years. The ECD programme is designed to improve the overall functionality and resources of ECD centres in Adelaide, Bedford, Cookhouse and Somerset East – improving access to quality education for the local children.

The ECD programme encapsulates Cookhouses’ long-term approach to socioeconomic development – ensuring that its impact and legacy extend beyond the wind farm’s life-span.