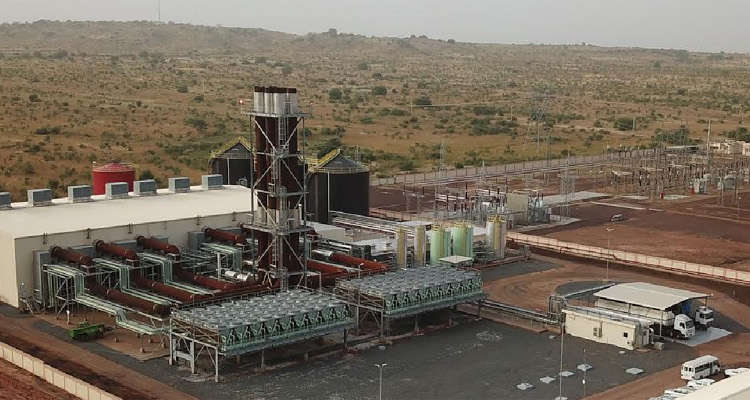 Albatros Energy Mali (AEM) is Mali’s largest and most efficient thermal power plant and the country’s first independent power producer (IPP) project. The thermal power station is situated 12kms from the city of Kayes in close proximity to the village of Médine, western Mali.

AEM consists of six Caterpillar diesel reciprocating engines, with a total capacity of 90MW – enough to power an estimated 780,000 households. Produced in line with the latest international environmental guidelines, this output represents around a quarter of Mali’s current installed base-load power production.

The project was first conceptualised in 2009 and development work began in the same year. By the start of 2016 development had reached an advanced stage and an equity consortium of likeminded partners came together to drive the project across the line, achieving financial close in July 2017.

Construction of the power station was completed in October 2018, two weeks ahead of the 16-month schedule – a significant achievement, given the construction, transport and logistical challenges encountered along the way, in part due to the remote location.

At midnight on the 31st of October 2018, AEM received its first dispatch notification and began to generate electricity, which it sells to the national utility, Énergie du Mali (EDM), under a 20-year PPA. The fuel and lubricating oil are provided to AEM by EDM under a fuel supply agreement. The plant is operated by Burmeister & Wain Scandinavian Contractor (BWSC), under a long-term O&M agreement.

"Albatros Energy Mali has proven its ability to implement a project of this magnitude with the first-class support and advice we have received from our partners. As one of our anchor partners, the team from AIIM has been crucial to the success of this project. Their knowledge and experience has enabled us to structure a competitive and well balanced funding solution, and we have been very impressed by their hands-on, practical, solutions-based approach.

Given the chronic infrastructure deficit in Mali and the limited levels of domestic public funding available, private sector participation has been identified as a critical component in the development of Mali’s infrastructure and broader economy. The project sponsors sought out experienced local and international partners with the required technical and financial acumen and ability to critically assess the structural and return requirements to implement this market-first transaction.

Financing for AEM was based on a limited recourse project finance structure, with 70% of the funding requirements provided by senior debt and the remaining 30% provided through a mix of share capital and shareholder loans.

To mitigate the interest rate risk, the lenders agreed to provide competitive fixed rate loans to AEM with long tenors of 12 and 13 years. Moreover, the debt comprises a mix of conventional project finance alongside an Islamic finance facility, as well as local currency and Euro denominated debt.

As one of the leading investors across Africa’s IPP sector, AIIM was able to add significant experience gained from similar first-in-market investments in the Azura IPP in Nigeria, Cenpower IPP in Ghana and a number of Round 1 investments via the South African renewable energy IPP program. This experience was a vital component in the development of appropriate risk mitigations in a market where information inefficiencies allow for strong risk adjusted returns to knowledgeable investors. As this was the first Malian independent power project, the project company and its shareholders worked closely with the Government to ensure that the Concession Agreement and PPA were appropriately structured to achieve project bankability. This included Government obligations to procure and supply fuel to the power plant, financial support from EDM in the form of a letter of credit underpinning EDM’s payment obligations to Albatros and a sovereign guarantee to protect Albatros, the lenders and shareholders for nonperformance under the contracts.

As a result of the groundwork laid by AEM, future IPPs should be able to undertake and complete their development more efficiently, enabling additional power capacity to be added more easily to the national grid. This will assist in keeping up with the rising power demand that is driven by Mali’s growing economy.

The importance of reliable and affordable electricity supplies cannot be overstated. In Mali, before AEM, only around a quarter of its 17.6m people had access to electricity. In villages and rural areas, this fell to just 15%.

This Greenfield power development adds circa 25% to Mali’s current base load capacity and is capable of providing electricity to an estimated 780,000 households. It is a significant first step in the Malian government’s policy to increase national generating capacity.

The project has also generated substantial local benefits. AEM has worked with a group of community representatives, chaired by the mayor of Hawa-Dembaya, looking at community priority projects including the provision of healthcare facilities in the village of Médine, implementation of a water master plan for the region, amongst other investments, as noted above.

AEM represents a major milestone for the country and for the private sector. The developers and investors have proven their ability to develop a project of this magnitude and overcome the multidimensional challenges towards reaching financial close. The realization of this first IPP project proves that Mali is ready and capable to forge its own destiny and to trust its local entrepreneurs with the structuring, development and implementation of strategic homegrown public private partnerships.