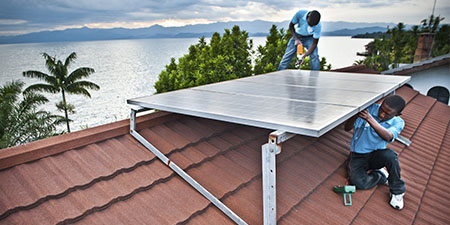 Governments and the private sector need to know what they’re getting into, says the transaction leader for fund managers AIIM

TAR: Developers in Africa – who can take an infrastructure project from concept to financial close and through the build stage – are in short supply.
How much of a drag is that on deal flow?
Romain Py: You do need developers when you develop a pathfinder project into a country. On the other hand, if it is a cut-andpaste affair, if you have an established model and you can just roll it over, then you don’t need one necessarily. So, for example, it’s easy to replicate the same model in a simple technology like solar, and so you can partially remove the role of a developer.

In some established markets like Côte d’Ivoire, they have a different master-planning approach: instead of developing plenty of new projects, they decided to phase capacity. So Azito power has had another extension phase, on a slightly different site [and] didn’t need a developer on that site.

So you need to understand in your country where you stand in terms of framework, what’s the number of reference independent power plants [IPPs] you have built, and also what is the institutional capacity of the government to put proper master plans together.

But often in African countries, the public sector is not there, so you will rely on the private sector, i.e. the developer, to do this planning. So, for example, in Ghana for the CenPower project, the government capacity was not there, so you needed a very strong developer to lead the project to financial close. We are currently closing on a 90MW plant in Mali called Albatros Energy. It’s the first IPP in the country so, as with Azura in Nigeria, you need a very strong developer because it’s the first time you are going through the contractual arrangements with the government.

What was the thinking behind your choice of developer in Ghana?

We are a bit different. We like to get local developers. We think the most important thing in Africa is helping build the local skills base. The perfect combination for us is a local developer who understands very well the environment and knows the local risks. Someone who is very strong on the technical side. And then we can bring in the financial muscle, the structuring capabilities.

What are African countries getting right when it comes to getting power projects through smoothly?

Firstly, it’s important that they are well advised – that they are humble. So no egos and listen to what people are telling you, especially if they have done it plenty of times before. And then you need leadership. From the top, they need to realise it’s an important asset for the country. Everyone in the government needs to move together in one direction because you will need the minister of finance, the minister of energy, the ministry of water, the minister of land. So if you get little wars between different ministries or different parts of the government, that slows down the development of the project. A flat hierarchy works best.

And it is not a construction contract. It’s not a two- or threeyear deal. It is a wedding. You are getting married. The government clearly needs to understand the obligation they are getting into. The private sector needs to clearly understand what they are proposing, and what are the penalties if they don’t deliver so you don’t get into a problem like with Turkana [a wind power project in Kenya], where you have the turbines built but the transmission isn’t.

Is there still a lot liquidity out there looking to deploy in African infrastructure?

Yes. Equity is not an issue, especially on the power side.